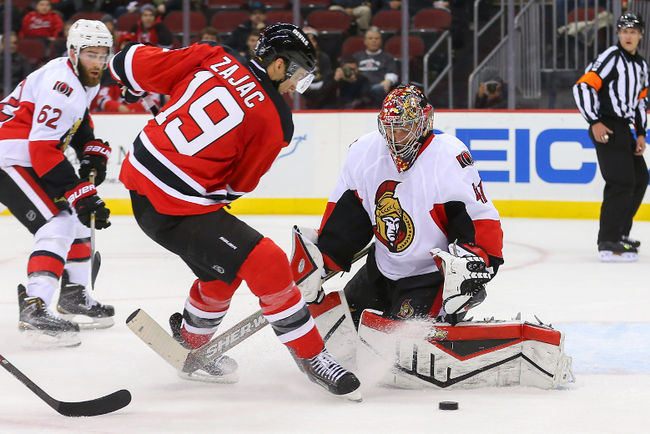 Recap:
NEWARK, N.J. — The Ottawa Senators will happily take the shutout, the two points and the five out of six they gained on their three-game road trip. They’ll take it all, pack up and go home feeling well because they’re in the business of winning and that’s all that matters.

But the Senators aren’t fooled by their recent success. They can’t be if they want to get better.

Ottawa beat the New Jersey Devils 2-0 at Prudential Center on Wednesday despite getting outshot 34-16. They won even though they had 25 total shot attempts versus New Jersey’s 58. They won despite the fact that they gave the Devils five power-play opportunities.

Kyle Turris scored a power-play goal on the Senators’ (13-12-6) first shot of the game at 2:47 of the first period, and goalie Craig Anderson did the rest with 34 saves before Turris scored an empty-net goal with 0.6 seconds remaining.

“We can leave here with five out of six on this road trip and feel good about what we accomplished, but we need to straighten up some things, get better in some areas,” Anderson said. “You cannot expect to win hockey games 1-0 getting outshot. It’s just not good quality hockey. I think we all know that and we’re all going to be better, and we know it.”

The Devils (11-16-6) were plus-18 in shots on goal and plus-33 in total shot attempts, but their scoring woes aren’t going away. They were shut out for the fourth time this season and the third time in the past 12 games.

“That’s as well as we can play and not win,” Devils coach Peter DeBoer said. “Those guys, they came out and wanted to make a statement about us being at home, and I thought the effort was there, the execution was there. They did everything we asked them to do other than the result.”

Except a new problem emerged for the Devils on Wednesday; their previously red-hot power play was shut down, going 0-for-5 with 11 shots on goal. New Jersey had scored power-play goals in three straight games and was 6-for-14 in its previous seven.

“I thought tonight we created enough chances to score some goals,” DeBoer said. “It wasn’t like we didn’t get in and get some good looks. It didn’t go in. You have to give Craig Anderson credit. He looked like we could have shot 100 pucks tonight and nothing was getting by him.”

The Senators (13-12-6) won in regulation for the first time under new coach Dave Cameron, who is 2-1-1 since replacing Paul MacLean on Dec. 8. They did it only because of Anderson, who made 10 saves in the first period, 16 more in the second, and eight in the third.

Cameron and the Senators were most disappointed with their inability to get pucks deep and their penchant for neutral zone turnovers. Combine the two and it’s no surprise that Ottawa didn’t have a shot on goal for 18:40 bridging the first and second periods.

Anderson made 12 saves during that span.

Turris gave the Senators the lead with his deflection goal from the slot 2:47 into the game. Devils defenseman Jon Merrill was in the box serving a delay of game minor for shooting the puck over the glass.

Senators captain Erik Karlsson took the initial shot from the right point. Turris gained inside position in the slot on Devils defenseman Peter Harrold and was able to get his stick on the puck to knock it down and past goalie Cory Schneider (14 saves) inside the right post.

It was Turris’ first goal in 11 games and his fourth of the season.

Mika Zibanejad broke the Senators’ streak without a shot on goal at 6:22 of the second period, when he sent a soft wrist shot on goal that Schneider easily knocked away. Their previous shot came off the stick of defenseman Eric Gryba at 7:42 of the first period.

Between Ottawa’s shots on goal, the Devils had 12 shots and four power-play opportunities, including a 5-on-3 for 19 seconds. They started the second and third periods with time remaining on the power play.

The Devils had a 26-8 advantage in shots on goal and 42-13 edge in total shot attempts after two periods. It didn’t matter.

“Points-wise it was a great road trip,” Turris said. “I think coming out of here we have a lot that we’ve seen that we can work on. It was blatantly obvious certain things tonight, getting the puck deep and not turning pucks over in the neutral zone.

“It’s nice to get the win coming out of this when you can see firsthand what you have to work on.”

The Devils were playing without rookie defenseman Damon Severson, who was a last-minute scratch because of a lower-body injury. DeBoer said Severson has been “dealing with something he couldn’t get through.”