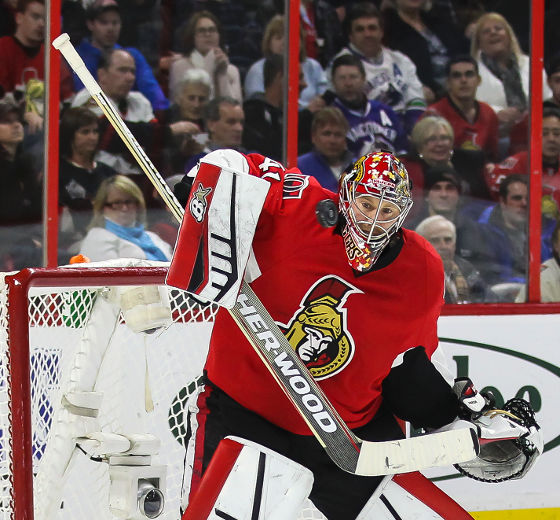 Recap:
OTTAWA — Erik Karlsson’s goal at 1:21 of overtime Sunday, his 23rd shot attempt of the game, gave the Ottawa Senators a 4-3 win against the Vancouver Canucks at Canadian Tire Centre and ended the Senators’ five-game losing streak.

Mika Zibanejad had two goals and two assists to help Ottawa overcome a 3-0 deficit. Zibanejad dropped the puck to Karlsson in the slot on the winner and the Senators captain sent a slap shot by Canucks goaltender Eddie Lack, who faced 45 shots, a season-high for the Senators.

It was the sixth game in a row the Senators entered the third period tied or in the lead and the first game they won in that stretch.

Senators goaltender Craig Anderson made 30 saves for his sixth win of the season.

“I was thinking about shooting it, and then he kind of comes up in my lane and I see Karl and I hear him so the best option for me was to just fake the shot and drop it to him,” Zibanejad said. “It worked out. We won the game.”

The goal came on Karlsson’s eighth shot on goal. He had nine shots blocked and another six missed the net.

“We didn’t start the game very well,” Karlsson said. “Vancouver was more on their toes. After that, I thought we took over and we controlled the game.

“We created a lot of good scoring chances which we just didn’t score on. By the end, we deserved to get the two points.”

The Canucks opened up a 3-0 lead on goals by Radim Vrbata and Kevin Bieksa 65 seconds apart in the first and a second-period goal by Brad Richardson.

A three-point second period by Zibanejad, including two goals for his first multi-goal game in the NHL, brought the Senators back from a 3-0 deficit after the Canucks got into penalty trouble.

With Ottawa enjoying a two-man advantage (its second of the game), David Legwand made it 3-1 at 10:53 of the second when he put in a rebound of a Zibanejad shot.

Zibanejad scored his sixth and seventh goals of the season in a span of 4:46 to tie the game.

Zibanejad made it 3-2 when he circled the net and banked a shot in off Vancouver defenseman Yannick Weber at 14:12.

He tied the game at 18:58 when he swept in and put a backhand behind Lack.

The Canucks lost two games in a row for the second time this season.

“Early in the second we got in penalty trouble and gave them life,” Vrbata said. “I don’t know how many 5-on-3s they had there and the momentum was gone. They scored a couple of goals and it was tough to get the momentum back.”

With the help of four power plays, the Senators outshot the Canucks 22-7 in the second period.

“We kind of shot ourselves in the foot a little bit,” Lack said. “When you take that many penalties, we’re going to be in our zone a lot. That’s about it. It’s the second of a back-to-back and when they’re in our zone a lot, obviously it wears down our ‘D’ a lot. I don’t know if we got tired or not, but obviously they got a lot of momentum too. It kind of felt like they were spending the entire second period in our zone.”

Bieksa said the game was uncharacteristic of the Canucks, who have been battling for the lead in the Pacific Division and the Western Conference.

“Our first [period] was good. We were playing our game, getting pucks deep and putting pressure on their ‘D’, all the things that have been making us successful in the first part of the season,” Bieksa said. “Then the second it all started with the penalties, myself included. Too many guys in the box. You can’t give a team that much power-play time and that much momentum. They took the game over there.

“It’s a lesson. We were in control. We were doing all the right things, then penalties and the next thing you know, we weren’t getting pucks deep, we’re turning pucks over, our ‘D’ zone was a little bit sloppy, our forecheck was non-existent at times. All the things that have made us successful, we stopped doing. You can’t take the little things for granted.”

Despite their early lead in the first half of the game, Canucks coach Willie Desjardins said the score flattered his team and the penalties it took in the second were too much to overcome.

“It’s hard on our ‘D’ and our goaltender, the amount they had to play [in the second period]. That’s tough for them. It certainly takes a toll at this point in the trip. That was a real tough period for those guys.”

The Senators played without defenseman Marc Methot, who was a late scratch after leaving the warm-up early. Methot has played two games this season; he missed the first 24 games because of a lower back/hip injury. Jared Cowen took Methot’s spot in the lineup.

The Canucks will conclude a seven-game road trip at the Montreal Canadiens on Tuesday; the Senators are off until Thursday, when they host the Los Angeles Kings.