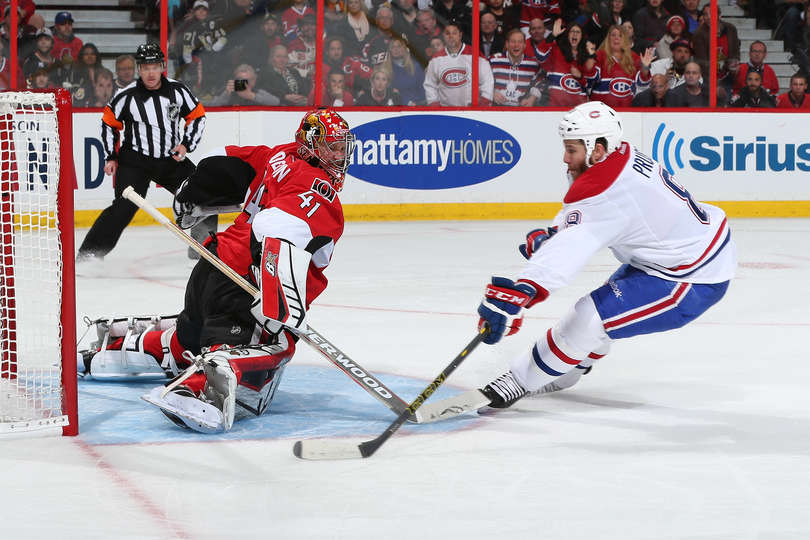 Ottawa avoided being swept out of the Stanley Cup Playoffs with a 1-0 win against the Montreal Canadiens at Canadian Tire Centre on Wednesday.

“I still don’t think it was the best game we played in the series,” Senators captain Erik Karlsson said. “We found a way to win and that’s what’s important. We live to see another day.”

Mike Hoffman scored at 9:05 of the third period and goaltender Craig Anderson made 28 saves for Ottawa, which trails the best-of-7 Eastern Conference First Round series 3-1 with Game 5 at Bell Centre on Friday (7 p.m. ET; CBC, CNBC, TVA Sports).

The Senators, who have had little margin for error the past three months, finally found a way to beat the Canadiens and goaltender Carey Price.

Hoffman scored his first Stanley Cup Playoff goal after some good hustle by center Mika Zibanejad. He hit Montreal defenseman Tom Gilbert as Gilbert, playing his off-side, tried to backhand the puck out of the zone along the boards from the corner.

The puck was knocked down at the blue line, and Senators defenseman Cody Ceci passed it to Hoffman in the high slot. Zibanejad went from the corner to the front of the net and screened Price as Hoffman’s shot went in high on the glove side.

“We needed to get bodies in the way of Price because he’s one of the best goalies in the world,” Hoffman said. “Mika did a great job of screening him there and it made it easy on me.

“Great play by [Zibanejad]. He might not have got an assist on the play, but if he wasn’t in front of Price there, he probably would have saved it. Hard work by him and a big reason why it went in.”

Hoffman led the Senators with 27 goals in the regular season, but the rookie’s defensive play dictates how far up in the lineup he will play. Cameron liked what he saw, so he felt comfortable making the shift.

“I thought he was very responsible the game before away from the puck,” Cameron said. “And then he was responsible at the start of tonight’s game … so you put him there and he rewards you.”

All four games in the series have been decided by one goal.

Anderson, playing his second game of the series after Andrew Hammond played Games 1 and 2 at Montreal, faced down Canadiens forward Brandon Prust, who had a shorthanded breakaway late in the second period.

Prust deked to Anderson’s right and hit the outside of the post. Prust said he ran out of room when Anderson threw his right leg out.

“That would have been the highlight of my whole career, that one,” Prust said. “I wish I could have buried it, that’s for sure.”

“We have a hard road to travel and there’s no reason why we can’t be in the next game also,” Anderson said. “We’ve been in all four games now. We’ve been right there. They’ve all been one-goal games. We just need to make sure we’re ready to go and bring it all again.”

The Canadiens power play continued to struggle. It was 0-for-3 in Game 4 and is 1-for-16 in the series.

“You know, we’re still in the driver’s seat and we still have to look at it that way,” Prust said. “Next game we’ve got to get back to playing a full three periods, get our legs moving. We stopped moving our legs there in the third and I think it cost us.”

The Senators ended the regular season on a 23-4-4 run to earn the first wild card from the Eastern Conference. Forward Mark Stone said a bond was created among the players and they don’t want their season to end.

“We’re just looking to fight another day,” he said. “It’s great. We know if we have one hiccup our season is over. We’re confident, comfortable, and just trying to take it step by step.”

Karlsson said, “I think this has been a great run we’ve been on. We’ve had a lot of fun with this group and we have a great group of guys. We’re enjoying this. We worked really hard to get to where we are today. We’re not going to go down without a fight.”