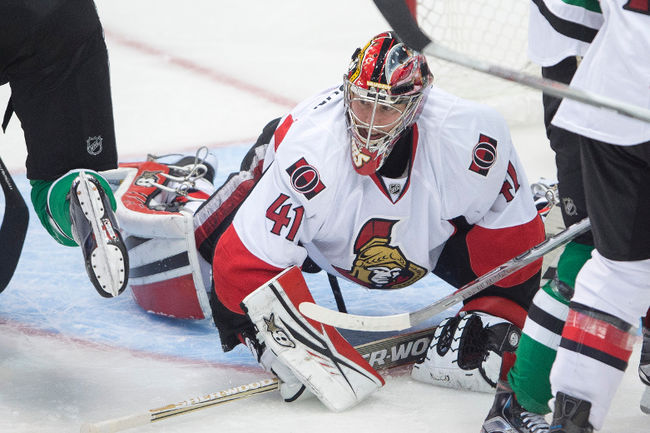 Jean-Gabriel Pageau and Mike Hoffman each scored twice to propel the Senators to a 7-4 victory on Tuesday, ending Dallas’ five-game winning streak.

Mark Stone had a goal and two assists, Bobby Ryan and Milan Michalek scored goals and Craig Anderson made 33 saves for Ottawa (11-5-5), which won its third in a row and is 6-2-1 on the road. The victory ended Ottawa’s seven-game losing streak to Dallas; the Senators hadn’t defeated the Stars since a 5-4 overtime win on Dec. 20, 2008. Their last win at Dallas, and their most recent regulation victory against the Stars, came on Dec. 7, 2007.

Dallas (17-5-0) got a second-period goal from Patrick Sharp that ended Anderson’s scoreless streak at 147:04, as well as two from Jamie Benn and one from Tyler Seguin in the third period. Benn leads the NHL with 16 goals.

“It’s a hard one,” Stars coach Lindy Ruff said when asked to explain the outcome. “It started with the first goal. Our defense had some big mistakes. John [Klingberg] might have had his toughest night of the year. That pair [Klingberg and Goligoski] might have had the toughest night of the year. We could have had two or three more goals scored against us. We could have had two goals at the end of the game scored against us.”

Hoffman scored a power-play goal late in the second period and Pageau scored with Ottawa shorthanded early in the third to give Ottawa a 5-1 lead. Dallas got as close as 6-4 in the final minutes, with Benn scoring twice and Seguin once, but Hoffman’s empty-netter with 1:42 remaining put the game away. That goal came on a length-of-the-ice bank shot seconds after Anderson robbed Benn at the near post with a spectacular diving save.

“Made the initial save through some traffic, off my pad and bounced out to the left side of me,” Anderson said of the save of the night. “I saw their guy coming down, kind of open net. Just trying to dive and get something over there and make him make a good shot. Just got fortunate enough that he buried it right in my chest and we were able to capitalize on the way out. But it’s one of those things where it goes the other ways, now we’re squeezing sticks a little bit.”

“Yeah, I guess so,” Hoffman said when asked if his big night was a good way to celebrate. “That empty-netter was pretty lucky, but I’ll take it.”

Ottawa, which was outshot 37-20, capitalized twice on turnovers by the Stars in their defensive zone for a 2-0 lead after one period, and led 4-1 after two.

“If you look at it, we’re getting chances. We had some good chances and we buried them,” Stone said. “They are very aggressive, so if you can make some kind of cute little plays to kind of get them spread out, you can generate offense. When they play that quick and that aggressive, you can find simple little plays to get your chances and I think that’s what we did tonight.”

Ryan extended his point streak to nine games when he converted a turnover by Klingberg into his eighth goal of the season 7:10 into the game. Michalek made it 2-0 at 18:49 when he beat Stars goaltender Antti Niemi top shelf inside the far post with a wrist shot from the left circle.

“It’s embarrassing,” Klingberg said of the loss. “We’ve got to get back at it [Wednesday] and practice and just start over.”

Sharp made it 2-1 with his eighth of the season 7:04 into the second, but Ottawa answered at 12:33 when Stone intercepted a Patrick Eaves pass and scored from the slot at 12:33, chasing Niemi from the game. Kari Lehtonen came on in relief; however, Niemi had to re-enter the game 1:05 into the third after Lehtonen was injured during a collision with Klingberg.

Ruff said his rationale for pulling Niemi after the third Ottawa goal was simple.

The Senators scored again with 2:19 remaining in the second when Hoffman beat Lehtonen to the short side with a power-play slap shot from the left point.

Pageau scored on a breakaway 4:07 into the third, beating Niemi with a wrist shot from the slot that he appeared to initially stop before the puck trickled through his pads. It was Pageau’s NHL-leading third shorthanded goal of the season.

“Curtis [Lazar] blocked a shot, gave me the chance to go on a breakaway. The guy [Jamie Benn] was backtracking pretty fast. I was just trying to get a shot on net and it went in, so I’m happy,” Pageau said.

Benn made it 5-2 with a shorthanded goal at 6:07, and Seguin scored off the rush at 8:04 with a wrist shot from the right circle that beat Anderson top shelf at the near post. Pageau’s second of the game restored Ottawa’s three-goal lead before Benn scored again with 3:12 remaining for his second consecutive two-goal game.

“It’s pretty embarrassing,” Benn said. “We gave them pretty much all their goals, just bad turnovers.”