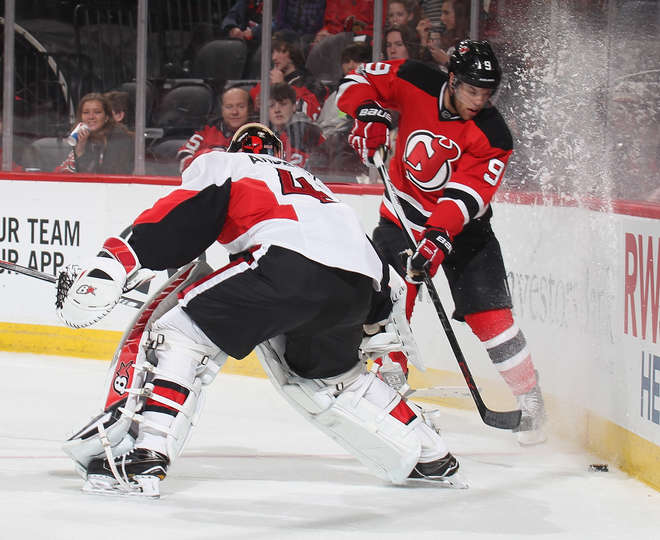 NEWARK, N.J. — Craig Anderson made 29 saves to help the Ottawa Senators to a 2-1 win against the New Jersey Devils at Prudential Center on Tuesday.

“We had different guys doing more then they’re used to and they did a good job at it,” Karlsson said. “Sometimes when you lose people that play a lot of minutes, you know someone else is going to have to fill that spot and I think we really embraced it.

“I don’t think we played our best game of the year but we found a way to stick with it.”

Karlsson scored a power-play goal off a snap shot from the right circle with Zack Smith providing a screen to give the Senators a 2-0 lead 4:11 into the third period.

The victory by Ottawa was its second against New Jersey at Prudential Center in six days; backup goalie Mike Condon made 21 saves in a 3-0 win on Feb. 16. The Senators swept the season series (3-0-0).

Zajac pulled the Devils within 2-1 when he scored a power-play goal 6:37 into the third. Joseph Blandisi controlled the puck to the side of the net and took a shot that deflected off the skate of Karlsson and onto the stick of Zajac at the right post.

“We’re not in the best spot but we have to keep finding a way to win games, compete and keep ourselves relevant in the [Stanley Cup Playoff] race,” Schneider said. “It’s going to take a lot now, but we can’t stop. We have to keep working and just try to pile up points.”

The Devils pulled Schneider for an extra attacker with 56 seconds remaining but could only generate one shot.

“Everyone was on the same page,” Anderson said. “There’s still some skill there but it starts with structure and taking care of the puck and frustrating the other team. When you frustrate the other team it opens up opportunities to make other plays and we did that.”

Turris scored his 20th to give the Senators a 1-0 lead 59 seconds into the first period. The Senators are 22-3-2 this season when scoring first.

Karlsson scored his 10th goal of the season after taking a pass from Dion Phaneuf, skating into the right circle and beating Schneider over his left shoulder.

“It was a pretty easy one when you have a good screen, so you read off that,” Karlsson said. “I kind of just picked my corner and it went where I wanted it to go for once. It definitely came at the right time.”

Anderson made a glove save against Zajac on a rebound 6:14 into the third period with the Senators holding a 2-0 lead. Taylor Hall took the initial shot from the left circle that Anderson also denied with his pad.

Turris scored to give the Senators a 1-0 lead after taking a pass from Ryan Dzingel in the right circle before snapping a shot inside the near post.

“It was a nice bang-bang play from [Jean-Gabriel Pageau] to [Dzingel] and Dzingel made a nice pass to me. I just tried to put it on net.”

Senators defenseman Mark Borowiecki, who leads the NHL with 257 hits (5.1 per game), had seven hits, three blocked shots in 16:49 of ice time.

“The nice thing about injuries is that every team has them and it opens up opportunities for other guys to step in. This was an opportunity for other guys to fill roles they normally don’t play, and I thought they did an outstanding job.” — Senators goalie Craig Anderson

“We had a real good effort. We did a lot of good things right and unfortunately sometimes that is not good enough. I thought our forwards were fantastic down low. Also, I think as defensemen we have to do a better job of getting pucks through.” — Devils captain Andy Greene

Karlsson leads the Senators with 28 points (seven goals, 21 assists) in 26 games on the road this season. Turris reached 20 goals for the third time in his NHL career and first since scoring 24 in 2014-15. … Devils rookie forward Pavel Zacha did not return to the game after sustaining an upper-body injury on a hit by Derick Brassard 11:21 into the second period. Devils left wing Michael Cammalleri was back in the lineup after being a healthy scratch the past two games. He had two shots in 15:12 of ice time.