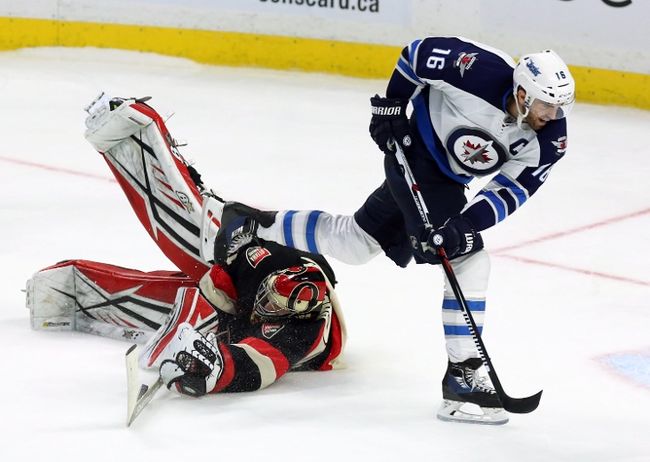 OTTAWA — The Ottawa Senators defeated the Winnipeg Jets 3-2 in a shootout Thursday for their second home win of the season.

Bobby Ryan, Kyle Turris and Mika Zibanejad scored in the shootout for Ottawa (7-4-2), which is 2-3-2 at Canadian Tire Centre.

“Establishing home ice for us is huge,” Turris said. “We’ve been talking lots lately about having energy at home, and getting off to a good start, and being into the game. It was something we did a much better job of tonight.”

Ryan and Cody Ceci gave the Senators a 2-0 lead.

“We were emotionally involved in the game tonight against a real good Winnipeg team that put us back on our heels a couple of times,” Senators coach Dave Cameron said. “We found a way to win a good hockey game against a good team.”

Andrew Ladd and Dustin Byfuglien, with goals late in the second period and early in the third, scored to tie it for Winnipeg (8-4-2).

Craig Anderson made 38 saves for the Senators; Michael Hutchinson made 29 for the Jets.

Hutchinson made back-to-back saves on Curtis Lazar and Turris with less than two minutes left in the third period.

Byfuglien, who had a strong game at both ends, tied it 26 seconds into the third period. Playing 4-on-4, he stripped the puck from Senators defenseman Erik Karlsson at the Winnipeg blue line and headed up ice. Byfuglien skated into the left-wing circle and scored his fourth goal of the season with a shot to the glove side.

“We got behind the eight ball and we stuck to our game plan pretty well,” Byfuglien said. “I didn’t feel like we were ever out of it. We got a point out of it on a back-to-back.”

Jets coach Paul Maurice said he hasn’t seen Byfuglien play as well as he has lately. Recognizing Anderson deserved to be first star, Maurice said Byfuglien was the skater who stood out.

“Past that, [Byfuglien] was the best player on the ice tonight, the most dominant force, and he’s been like that for a while,” Maurice said. “Right after [playing the New York Rangers on Oct. 13], probably [against the Calgary Flames] at home when we got back off that first trip, he’s been as good as I’ve ever seen him play.

“He’s been good for a while. It’s harder to see one player dominate a game. We went a run of Tampa [Bay], L.A., St. Louis, Chicago, so it’s hard for a guy to kind of elevate against the way he has — it’s nothing to do with Ottawa — it’s just when you’re playing big, strong, physical teams, you notice [him]. He’s at both ends of the rink now. He’s just moving faster, moving quicker.”

Ladd made it 2-1 at 17:19 of the second period, ending a long sequence when the Jets had the Senators running around their zone.

Wheeler took a hit behind the Ottawa net from Senators defenseman Mark Borowiecki and passed the puck to Ladd, who was positioned on the goal line to Anderson’s right. Ladd’s shot from a sharp angle went in for his fourth goal of the season.

Ryan put the Senators ahead 2-0 at 12:04 of the second period when he finished a crisp 2-on-1 break. He scored his fifth of the season off a pass from Zibanejad.

Ryan has four goals, two assists and 24 shots in his past six games.

Ceci scored off a faceoff through a screen at 10:01 of the first period.

Hutchinson said he wasn’t surprised they opted to shoot.

“Not really. They’re all three good shooters and they made good shots,” he said. “I’d like to have one or two of those, but at the same time, they’re great shooters.”