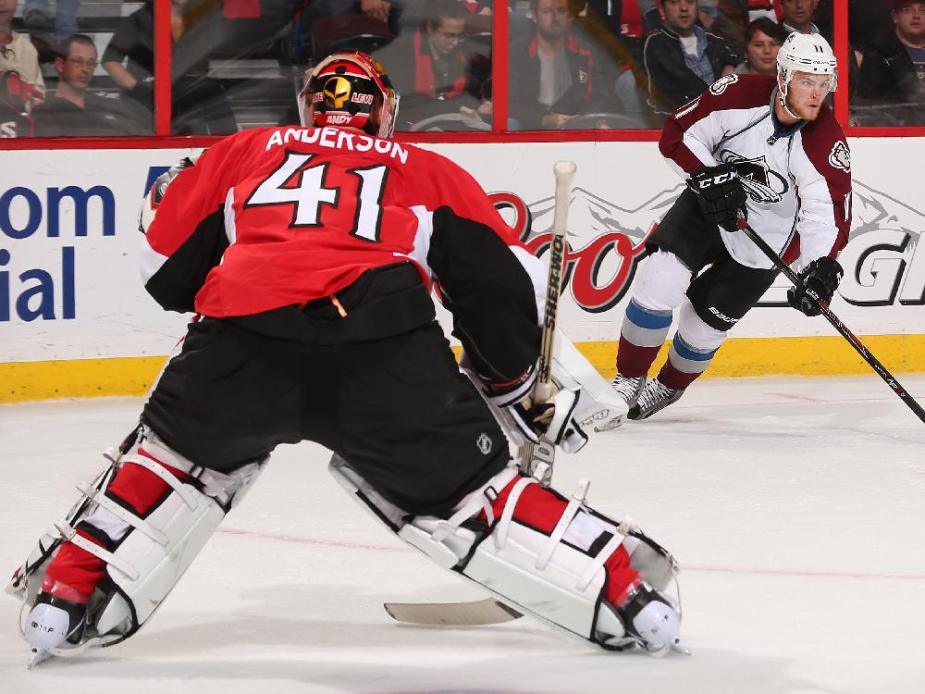 OTTAWA — The Ottawa Senators were a frustrated hockey team for much of the first period Thursday.

Their power play was struggling and there was a sense they weren’t taking advantage of 22-year-old Colorado Avalanche goaltender Calvin Pickard, who was forced to make his NHL debut after Reto Berra was injured 2:47 into the game.

But third-period goals 3:04 apart by Bobby Ryan and Clarke MacArthur allowed the Senators to win their home opener 5-3.

“We were frustrated. We needed 20 minutes to blow the smoke off,” MacArthur said. “They pressure hard everywhere and we had to get the puck in the middle and bump it up just to slow the pressure down. Once we did that we were fine, but we made it hard on ourselves in the first.

“Last year maybe things go a different way. You get down two or three and you get frustrated and we did the individual thing. I thought we stuck with it. That’s the only chance we have this year is if we play together. That was a good example [Thursday] night.”

Colorado’s No. 1 goalie, Semyon Varlamov received treatment for a sore groin Wednesday and was placed on injured reserve Thursday.

Pickard was called up by the Avalanche from the Lake Erie Monsters of the American Hockey League to back up Berra. Pickard was selected by the Avalanche with the 49th pick in the 2010 NHL Draft and was 1-1-0 with a .952 save percentage for Erie this season.

Berra was injured when Senators center Kyle Turris collided with him after Turris was pushed by Colorado center John Mitchell.

The Avalanche, who had four goals in their first four games, took a 3-1 lead in the first period.

Alex Tanguay, Mitchell with a shorthanded goal, and Gabriel Landeskog on the power play, each scored his first goal of the season for the lead.

Zack Smith had Ottawa’s only goal of the first period, knocking in a loose puck off a shot from Senators rookie Curtis Lazar at 11:01 to make it 2-1. The assist was Lazar’s first NHL point.

The Senators scored the only goal of the second period when Pickard mishandled a shot by Ottawa defenseman Erik Karlsson with his glove hand, giving up a big rebound to forward David Legwand as the Senators power play scored at 6:11.

“I did some good things, but I thought I’d like to have that second one back. I’ve got to make that glove save on Karlsson,” Pickard said.

Ryan beat Pickard with a shot along the ice from the left circle at 8:39 to tie the game 3-3 after a rush by Ottawa defenseman Cody Ceci off an Avalanche turnover in the neutral zone.

MacArthur scored the winner at 11:43 from the right circle after taking a pass from Matt Stone, who did a good job gaining the Colorado zone on the right wing.

“We cannot be happy about our game overall,” Avalanche coach Patrick Roy said. “We had 13 turnovers. If you do turnovers when you’re up by one goal, eventually the puck is going to end up in the net.

“We can blame it on a 22-year-old goalie, but, hey, we have to be better with the lead. We have to be a lot smarter than that.”

The Senators had four power plays in the first period but picked up where they left off last season as they failed to score. Ottawa was last in the NHL with 16 power-play goals at home last season.

The problem was made worse when the power play surrendered the shorthanded goal to Mitchell, in his season debut, to make it 2-0 at 9:57 of the first period.

“I thought we had a lot of nerves in that game, but we found a way to stick with it and the second half of the game we were much better,” Senators coach Paul MacLean said.

MacArthur said, “I think the crowd gave us a little jitters at the start. Obviously, the sellout and they’re pumped up. I knew I was jittery a bit.”

“I was excited,” he said. “You always have to be ready in this league and I got thrown right into it, two minutes in. It was probably a good time for a debut because you just didn’t have to think about it. It was a fun atmosphere in a good Canadian building. It was a good experience, but I would have liked to get the win for sure.”