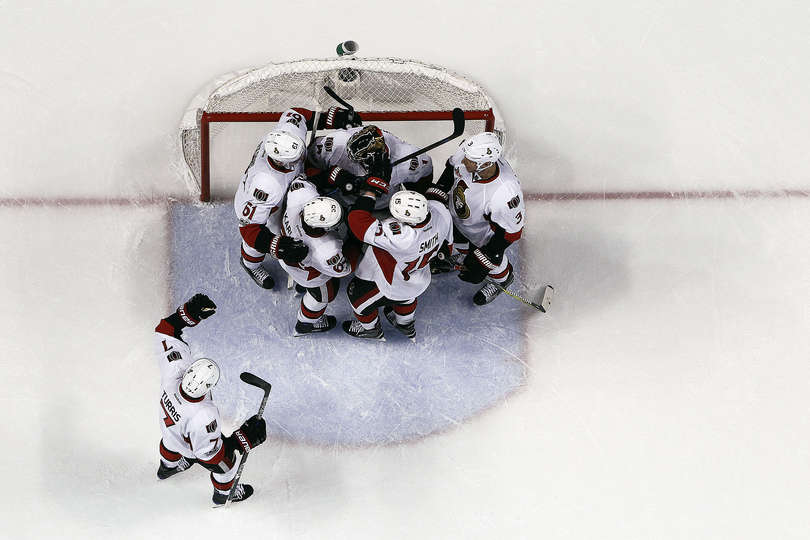 Craig Anderson made 37 saves to help the Ottawa Senators move within two points of the first-place Montreal Canadiens in the Atlantic Division with a 2-1 win against the Florida Panthers at BB&T Center on Sunday.

Zack Smith and Kyle Turris scored for the Senators (33-21-6), who are 2-1-0 on a four-game road trip. The Senators have two games in hand on the Canadiens.

Jonathan Marchessault scored for the Panthers (28-23-10), who have lost three games in a row at home after a 5-0 road trip. James Reimer made 31 saves.

The Panthers are three points behind the Toronto Maple Leafs for the second wild card into the Stanley Cup Playoffs in the Eastern Conference.

“It was a fun one to be a part of,” Anderson said. “There was a lot of action going both ways with a lot of shots going both ways. I think it was an exciting game for all of us.”
The Senators were coming off one of their poorest efforts of the season in a 3-0 loss to the Carolina Hurricanes on Friday, but they have shown the ability to bounce back this season.

“When we didn’t have a good game, the game after that you could bet your money that the guys are going to show up big-time, and they did,” Senators coach Guy Boucher said. “A rebound from the last game was huge from our players.”

Turris gave the Senators a 2-1 lead at 9:58 of the second period when he scored his 21st goal of the season.

The Senators took a 1-0 lead at 6:28 of the first period when Smith scored shorthanded on a rebound of a hard shot by defenseman Erik Karlsson from the right wing. The puck bounced off Reimer and into the slot to Smith, who was charging towards the net. It was Smith’s 15th goal of the season and his third shorthanded, tied for the League lead.

Marchessault tied the game 1-1 at 17:13 on the power play. “I don’t think it was our best effort but we battled,” Marchessault said. “I think we were dominating the ‘O’ zone a little bit, but we’re having problems lately bearing down on our chances.”

“I think we need to be better going in front of their net and winning the small battles there and in the corners.”

Turris took a pass from Mike Hoffman and broke in on the right wing. He cut to the net and lifted a shot over Reimer’s left shoulder into the top of the net.

At 11:09 of the second period with the Panthers on the power play, Anderson and Zack Smith teamed up to stop a backdoor attempt by Florida’s Reilly Smith. Smith got his stick on the puck and Anderson made a glove save to keep the Senators ahead 2-1.

“He fanned on it, so I think I got a lucky break where he didn’t get all of it and just had to track it,” Anderson said. “It was slow enough where I was able to react. If he gets all of that, a slap shot from there, 90 miles an hour, you’re not going to stop it unless it hits you.”

Marchessault’s goal was the result of a nice three-way passing play. Keith Yandle started it at the point, passing the puck down to Jonathan Huberdeau in the right wing circle. Huberdeau passed it across the slot to Marchessault, who put it in the open side of the net for his 19th goal of the season.

“I’ll be honest with you. I went to church and lit up some candles. I guess I lit up enough candles.” — Senators coach Guy Boucher on the return of forwards Mark Stone and Mike Hoffman, who missed two games with injuries

“We did what we had to do for 60 minutes to be successful and that was playing a tight game, and I thought we did a good job of that, keeping them to limited scoring chances with the talent they have on that team.” — Senators captain Erik Karlsson

“We can’t complain about the effort. The effort was unbelievable. We had [72] attempted shots … we were unlucky, that’s all. If we play like that we’ll win a lot more.” — Panthers coach Tom Rowe

Zack Smith leads the NHL with eight shorthanded goals since the beginning of the 2015-16 season. … Senators forward Chris Neil moved past Ken Daneyko and Joe Kocur into 20th place all-time in NHL penalty minutes with 2,522. He had seven in the game.