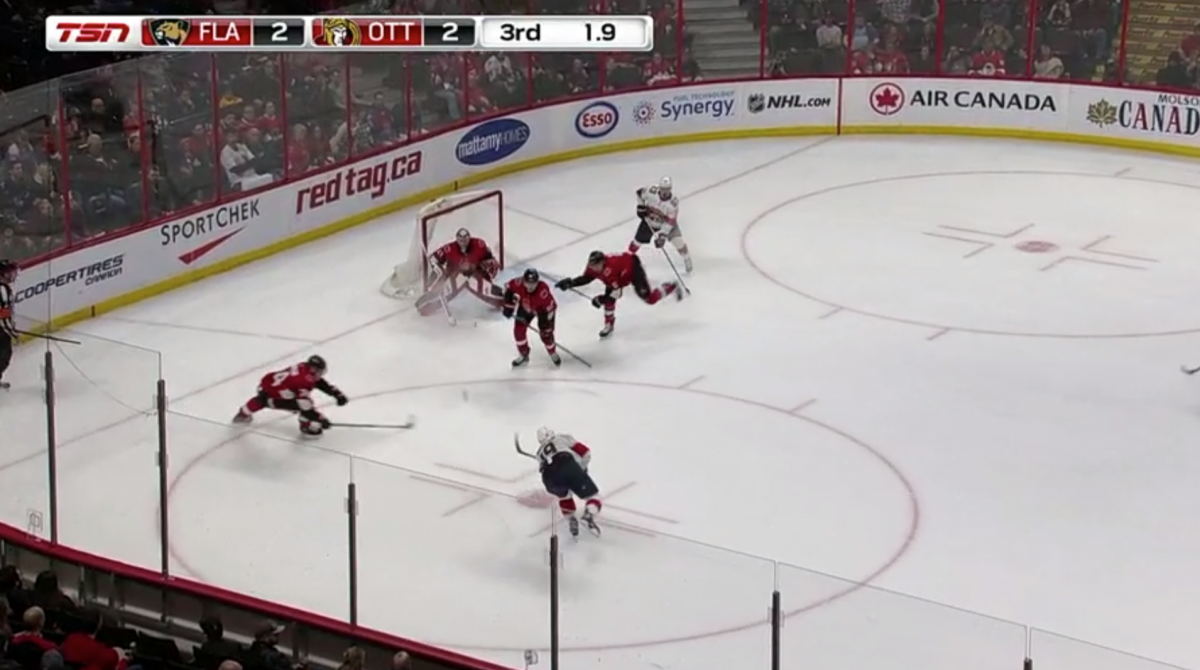 OTTAWA — The Florida Panthers failed to gain ground in the race for a wild card into the Stanley Cup Playoffs, losing 3-2 in overtime to the Ottawa Senators at Canadian Tire Centre on Thursday.

“The positives are we got a point,” Panthers goalie James Reimer said. “We’re going to keep rolling and keep winning games and see where it stands at the end of the year.

“We’ve got to make these next couple games count. We know what’s on the line and we understand what we have to do and we’ll do what it takes.”

The Panthers (39-29-8) trail the New Jersey Devils by three points for the second wild card in the Eastern Conference with one game in hand. New Jersey lost to the Pittsburgh Penguins 4-3 in overtime.

“We [saw] what was happening on the Jumbotron,” Florida coach Bob Boughner said. “It was a chance for us to gain a point on the team we’re chasing and we didn’t get it done.”

Jean-Gabriel Pageau scored on a penalty shot with 16 seconds left in overtime.

“That’s the only move I know,” Pageau said of beating Reimer with a snap shot under the pad.

Magnus Paajarvi scored, and Craig Anderson made 24 saves for the Senators (27-39-11), who ended a six-game losing streak.

“It’s huge, especially at the end of the season,” Pageau said. “Some people say that game doesn’t mean anything for us, but it does. We’re still trying to get better, trying to build some confidence, trying to get that winning confidence back.”

Pageau got the puck behind the Panthers net and scored with a wraparound to give the Senators a 1-0 lead at 1:24 of the second period. The Panthers tied it 1-1 when Ekblad scored off a wrist shot from the slot on the power play at 5:19.

Dadonov gave Florida a 2-1 lead when his wrist shot went off the post at 6:50.

Paajarvi tied it 2-2 when he tipped a point shot from Zack Smith 16 seconds into the third period.

Goal of the game
Pageau’s penalty shot with 16 seconds left in overtime.

Save of the game
Anderson’s glove save on Colton Sceviour at 18:34 of the third period.

Highlight of the game
Reimer’s glove save on Pageau at 18:02 of the second period.

They said it
“It was an awesome, awesome experience. I was pretty nervous before the game, but after the first shift, I wasn’t that nervous anymore. We didn’t get the win, which is pretty heartbreaking.” — Panthers forward Henrik Borgstrom on playing in his first NHL game

“I’m doing OK. It’s been an extremely tough time and a situation that [we] never expected to be in. … I just want to thank my teammates for understanding, this organization, this community and people around the League and people that we don’t even know for giving us their support and our time to be by ourselves and grieve.” — Senators captain Erik Karlsson on the support he and wife Melinda have received after their son Axel was stillborn

Need to know
Ekblad’s 16th goal is his NHL career high and tied the Panthers record for a defenseman (Jason Garrison, 2011-12). … With an assist on Paajarvi’s goal, Karlsson has five 50-assist seasons in the NHL. He has 17 points (four goals, 13 assists) in his past 13 games.