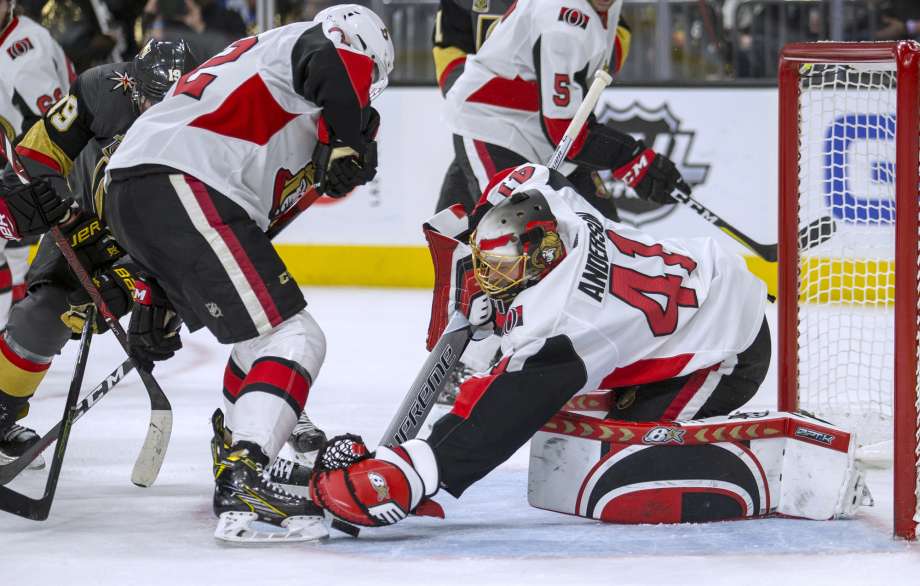 NHL.com Recap
The Vegas Golden Knights lost their third straight game, 5-4 to the Ottawa Senators at T-Mobile Arena on Friday.

Reilly Smith, William Karlsson and Colin Miller each had a goal and an assist, and Marc-Andre Fleury made 33 saves for the Golden Knights (41-18-5), who lead the San Jose Sharks by eight points for first place in the Pacific Division.

Bobby Ryan had a goal and two assists, Erik Karlsson had three assists, and Craig Anderson made 25 saves for the Senators (22-31-10), who ended a five-game losing streak.

“I think we got out-competed tonight. We didn’t work hard enough and we had one line going. You’re not going to win many games like that,” Golden Knights coach Gerard Gallant said. “The compete level wasn’t there. You can look at one thing, but it wasn’t one thing, it was a lot of things. We weren’t ready to compete and that’s why we lost.”

Alexandre Burrows scored at 8:51 of the third period to give the Senators a 5-4 lead, redirecting Karlsson’s shot from the point past Fleury. It was Burrows’ first game back following a 10-game suspension.

“They are a team that competes really hard. They are top of the league right now and they feed off that crowd,” Burrows said. “It was a great experience for us. That crowd was really loud and got us going. I thought for the most part, we did a lot of good things. We made it interesting in the third, but we found a way to get it done. It feels good to win in this building.”

Smith scored 58 seconds into the first period to give Vegas a 1-0 lead.

Mark Stone tied it 1-1 at 2:19, taking a pass in front from Ryan, spinning, and scoring on the forehand.

Miller scored on the power play at 18:22 on a shot from the point past a screened Anderson to make 2-1.

“I thought we came out real strong. I thought our first period was great,” Senators coach Guy Boucher said. “It’s too bad that we were trailing, and to only give up three shots to an opponent that is amazing at home, they don’t have a lot of losses here. I thought we played great. I thought it was a follow-up of our last game in Washington [3-2 loss] where we only gave up 22 shots.”

Ryan tied it 2-2 on a breakaway at 3:57 of the second period off a stretch pass from Stone.

“It was a great pass and we had eye contact for three seconds before it, so I knew it was coming,” Ryan said. “I was trying to find that lane for him, but I got little too far across the ice and I had to pivot backwards, and I made it way harder on myself to pick it up than I probably needed to, but his touch was incredible on it. It was a great pass.”

Jean-Gabriel Pageau scored at 14:41 to make it 4-2 on a one-timer from just above the right circle.

Karlsson scored at 3:35 of the third period on a shot off the left wing to make it 4-3.

“I think we’re better than this as a team. I think we’ve shown that we can be a solid team for 60 minutes and play a full 200 feet,” Fleury said. “We showed some character in the third. We battled back and it was unfortunate they got their goal at the end there.”

Goal of the game
Ryan’s goal at 3:57 of the second period.

Save of the game
Anderson’s save on Jonathan Marchessault at 8:29 of the second period.

Highlight of the game
Burrows’ goal at 8:51 of the third period.

They said it
“You hope it’s a pivotal [win] for us and we can finish as strong as we played tonight. We gave up a few too many goals, there was some breakdowns, but it was a very good win against a very good hockey team.” — Senators forward Bobby Ryan

“That’s something that we’re going to have to fix coming down the stretch. These games going into playoffs are going to be tight. We can’t let that happen. I just think we weren’t making the simple plays, we were turning too many pucks over in the neutral zone, and allowing them to get more offensive zone time than us.” — Golden Knights defenseman Shea Theodore on giving up the lead