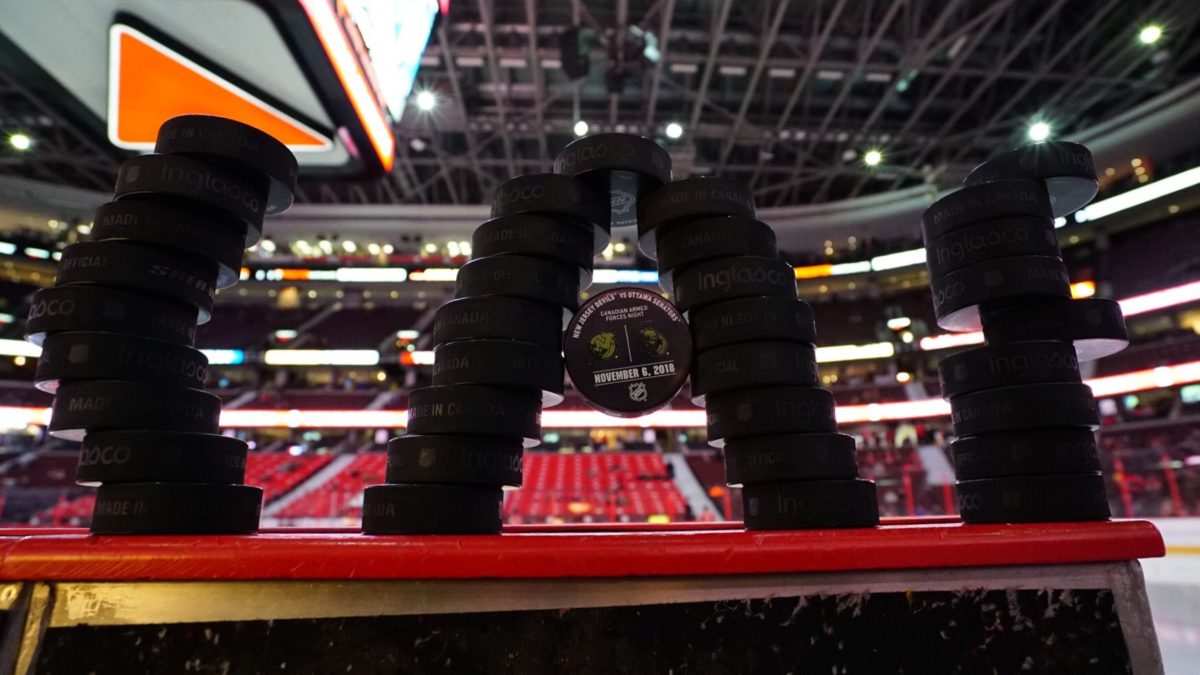 NHL.com Recap
OTTAWA — Mark Stone had two goals and three assists for the Ottawa Senators in a 7-3 win against the New Jersey Devils at Canadian Tire Centre on Tuesday.

Thomas Chabot had a goal and two assists, Colin White had two goals, Matt Duchene had three assists and Craig Anderson made 30 saves for Ottawa (6-6-3), which had lost two straight.

“Once we got that first [goal], I thought we did a really good job at pushing back and kind of imposing our game on them,” Duchene said. “We kept the hammer down. We didn’t change our game even when it was close. That’s the type of hockey we need to play.”

Taylor Hall, Travis Zajac and Kyle Palmieri scored, and Nico Hischier had two assists for New Jersey (6-6-1). Cory Schneider allowed four goals on 22 shots. He was replaced in the second period by Keith Kinkaid, who made 17 saves.

“If you get a 2-0 lead in a game, you should probably win,” Hall said. “From about the 10-minute mark of the first period and on, we seemed to be outplayed.”

It was the first game for Ottawa after a video of seven Senators was published containing criticism of an assistant coach and the penalty kill.

“I want to take this opportunity to extend my absolutely sincere apologies to [Martin] Raymond,” said Duchene, one of the Senators in the video. “He is a heck of a person and coach and he did not deserve what we said. That’s all I can say on it right now, unfortunately. I sincerely, sincerely mean that, on behalf of myself and my teammates.”

“It’s incredible,” Duchene said. “I’d love to say I’m surprised, but I don’t think that I am because of the skill level he’s shown since I saw it for the first time last year.

“He’s already a superstar. He’s a guy that, if he keeps going this way, he’s going to be a Norris [Trophy] candidate this year. And we’d love to see that from him. We need him to keep doing it because he’s really driving things back there for us.”

Stone scored 53 seconds later on a tap-in off a cross-crease pass from Duchene to tie it 2-2. The goal was Stone’s 100th in the NHL.\

“You can’t take for granted playing in the best League in the world,” Stone said. “To be able to have some success doing it is awesome.”

White gave the Senators a 3-2 lead on a one-timer in the slot at 2:27 of the second period, and Stone extended the lead to 4-2 at 7:35. Schneider was pulled following the goal.

White scored a power-play goal to make it 5-2 at 17:44. Following an initial shot by Stone, White got the rebound in the crease and scored into an open net.

Anderson left the game with an undisclosed injury at 14:57 of the third period. He was replaced by Mike McKenna, who made six saves.

They said it
“We did it to ourselves tonight. That’s the thing. It’s not like they were bad bounces or fluky goals. They were total breakdowns. We didn’t give our goalies a chance tonight. On the first four or five goals, they were tap-ins.” — Devils defenseman Andy Greene

“I’ve said it all season and I’m going to keep saying it, we have a heck of a group in here. It’s impressive what we have in here and how we can do what we did tonight.” — Senators forward Matt Duchene

Need to know
Senators forward Bobby Ryan left the game at 6:52 of the third period. Coach Guy Boucher said Anderson and Ryan left for precautionary reasons and “should be fine.”