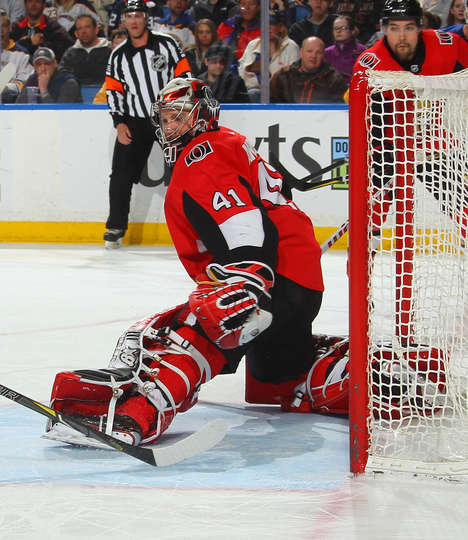 BUFFALO — The Buffalo Sabres will have the best odds to win the NHL Draft Lottery after losing to the Ottawa Senators 4-2 at KeyBank Center on Wednesday.

The Sabres (25-43-12) will finish last in the NHL standings for the third time in five seasons.

“I don’t think anyone really coming in envisioned this,” Buffalo right wing Jason Pominville said. “Certainly not myself, being on the outside coming in and hoping we’d be headed in the right direction. And sometimes we are, but for the most part we’re not. We take steps forward and then we take a couple back. Yeah, we had injuries and stuff like that, but with the group we have, I still don’t believe we should be where we’re at. But we are there, and things [have] to change.”

Craig Anderson made 32 saves for the Senators (28-41-11), who are next-to-last in the NHL, two points behind the Montreal Canadiens and Arizona Coyotes with two games remaining.

“We’re out there, we’re playing to win, we want to win as many games as we can and prove that we belong in the roles that we play,” Anderson said. “We want to make sure we play for each other, we play for our fans, we play for the crest on the front. We know that all we can do is go out there and work hard and let the chips fall as they may.”

“I believe in our system, I believe in our structure, I believe we do play a brand of game that’s the right way; we’re on top of people, we’re not cheating the game, and we’re doing things for the better part of the team, you can see we’re a good hockey team,” Buffalo coach Phil Housley said. “This is just where we are as a group. Let’s be honest, we have a long way to go.”

O’Reilly gave the Sabres a 1-0 lead 30 seconds into the first period with a breakaway goal after a pass from Scott Wilson. Max McCormick made it 1-1 at 2:56 when he tipped a shot by Mark Borowiecki.

“I think we bounced back right after [O’Reilly’s] goal,” Senators coach Guy Boucher said. “Made a mistake on that backcheck there, our [defense] was supposed to pinch in, that was not the [defenseman’s] fault, we should’ve had one or two forwards back there. But hey, we got it back and the players battled hard.”

Matt Duchene gave Ottawa a 2-1 lead at 6:10 of the first when his shot from the high slot got through a screen by Colin White. Ryan Dzingel made it 3-1 at 3:21 of the second period from the right face-off circle.

Kyle Okposo made it 3-2 at 16:41 of the second period when his shot from the slot got through a screen by Evan Rodrigues.

Alexandre Burrows scored an empty-net goal at 19:21 of the third period to make it 4-2.

Goal of the game
Dzingel’s goal at 3:21 of the second period.

Save of the game
Anderson’s save against Brendan Guhle at 9:34 of the second period.

They said it
“Obviously Erik’s such a good player, such an anchor for us, it gave more responsibilities to guys like Borowiecki and [Cody] Ceci; they’re the anchors when he’s not there. But you saw guys like [Thomas] Chabot and [Christian] Wolanin, [Ben] Harpur, [Fredrik] Claesson also I think has played really well in the last games taking on more of a role because the guys have to, but I think they did well with it.” — Senators coach Guy Boucher on playing without captain Erik Karlsson, who did not travel to Buffalo

“I expected definitely a lot more, but you can expect all you want. It comes down to doing it and getting better, and obviously we got worse. Yeah, it’s tough, but it’s not completely over. We have a couple of games left. We’re focused on that and we’ll have to reflect at the end.” — Sabres center Ryan O’Reilly on if he expected Buffalo to be last in the NHL

Need to know
Senators forward Bobby Ryan let the game in the first period with a lower-body injury. “Day to day, we’ll see tomorrow,” Boucher said. “It’s not something bad, but it was tender there, so we figured we’d be OK with the guys that are there and hopefully he’ll be back for the next game.” … Borowiecki’s assist was his first point since March 13 (10 games). … O’Reilly (three goals, three assists) and Sam Reinhart (four goals, two assists) each has a four-game point streak. … Karlsson is not expected to play in Ottawa’s final two games, remaining at home to be with his family after his son was stillborn last month. … The team that finishes 30th has a 13.5 percent chance to get the No. 1 pick in the 2018 draft. It decreases to 8.5 percent at 27th.