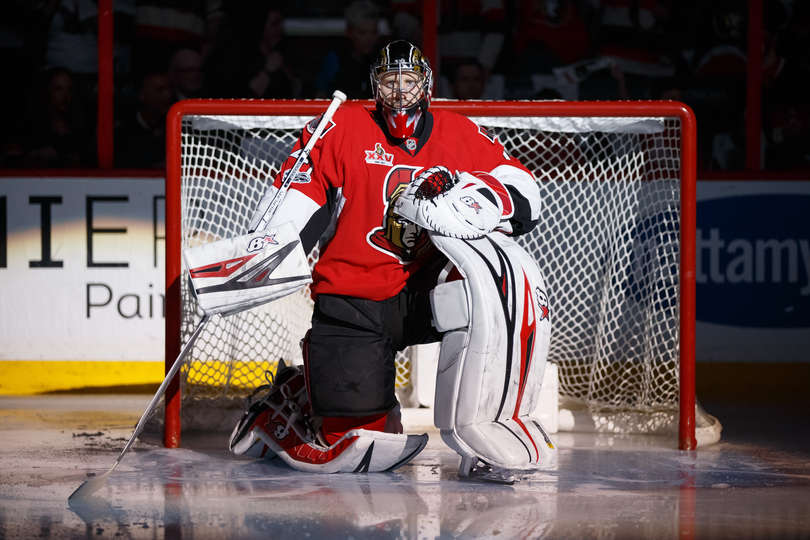 NHL.com Recap:
OTTAWA — Erik Karlsson scored off a shot from the goal line with 4:11 left in the third period, and Craig Anderson made 34 saves to help the Ottawa Senators defeat the New York Rangers 2-1 in Game 1 of the Eastern Conference Second Round at Canadian Tire Centre on Thursday.

“That’s what the great players do, they come up with stuff at the right time and they can take the pressure,” Senators coach Guy Boucher said of Karlsson. “I don’t think you should ever get used to that, and our fans should appreciate what we have here. It’s more than a star right now, and that’s what I think is unbelievable. He’s a skilled player that became a star and now he’s a winner. He’s inspired our group with all year long.”

Karlsson’s initial shot hit Rangers defenseman Ryan McDonagh, but the puck came back to him. His second attempt went in off of goalie Henrik Lundqvist’s head after the shot missed McDonagh, Rangers center Derek Stepan and Senators center Jean-Gabriel Pageau.

“The amount of pucks that we put on the net, we deserved one of those,” Karlsson said.

It was Karlsson’s first goal in the 2017 Stanley Cup Playoffs. He had six assists in Ottawa’s six-game win against the Boston Bruins in the first round.

“There’s three guys in line with that puck and I didn’t pick it up,” said Lundqvist, who made 41 saves. “It just hit me in the head and it’s in. I assumed that having that many guys right in the line of the puck that it would not end up right in front of me, but it did, so it’s a tough one.”

Ottawa killed a New York 6-on-4 advantage in the final 39 seconds.

“I think the players didn’t want to get swept in four,” Boucher said. “We hear it from everybody how good they are, and it’s all we could hear, how much they were going to crush us. … Maybe there was a lot of fear tonight that helped us and the guys were able to do it.”

Game 2 of the best-of-7 series is here Saturday.

The Rangers took a 1-0 lead on McDonagh’s power-play goal at 7:10 of the second period. He put a wrist shot past Anderson, who was screened by Chris Kreider. Ottawa forward Ryan Dzingel scored a power-play goal with 1:21 remaining in the period to tie it 1-1.

“It’s a tough one when we had about 1:20 left until the third period being up a goal,” Rangers defenseman Dan Girardi said. “That’s playoff hockey in a nutshell. It’s not going to be perfect. Both teams had some great looks in the third and it could have went either way, but we’ve got the right guys in the room here to get us refocused and settled down.”

Lundqvist made a save on Kyle Turris’ high shot from the left circle but the rebound came out to Dzingel below the right circle, and he scored on a high shot.

Anderson made a glove save on Brendan Smith’s shot off a rebound from the slot at 14:01 of the third period. It prevented the Rangers from taking a 2-1 lead, and Karlsson scored 1:48 later.

Karlsson said he wasn’t shooting to score on his winning goal, that he was just hoping to get a good bounce. The Senators captain said he had time to see the lane in front of him because McDonagh lost sight of the puck.

Seconds before Karlsson scored, Methot held the puck in the offensive zone at the left point by reaching his stick back and preventing Rangers forward Rick Nash from starting what could have been a 2-on-1 the other way.

“We know if we want to score goals we’re going to need lots and lots and lots of shots on Lundqvist. He’s at the top of his game. Anything below 40 shots really we’re not going to score anything. We know that. We got a lucky one at the end and it served us well.” — Senators coach Guy Boucher

“That’s the life of a goalie. I made probably a hundred decisions, 150, I don’t know, a lot of decisions throughout the game, playing my game, did the right thing, and it comes down to a play when you don’t see the puck and you just kind of wait for it trying to be a little bit more active. And that’s the one play you get questions for. That’s just how it goes.” — Rangers goalie Henrik Lundqvist

Lundqvist made 21 saves in the first period, an NHL career-high for one period in a playoff game, according to the Elias Sports Bureau. … It was Karlsson’s first game-winning goal in 36 Stanley Cup Playoff games.