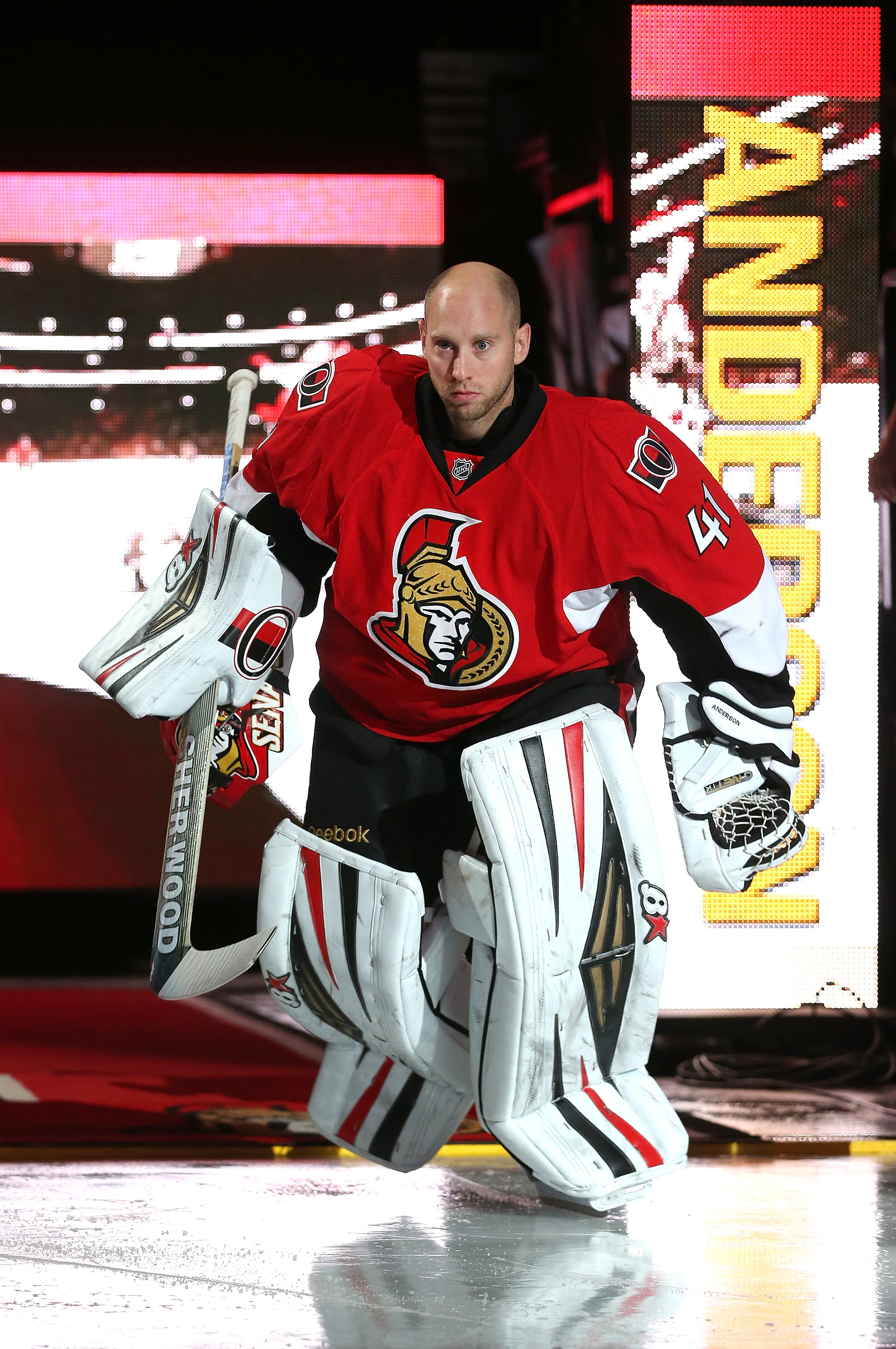 OTTAWA — The Ottawa Senators’ special teams did a number on the Pittsburgh Penguins, who saw another key player felled by injury.

Craig Anderson made 27 saves for his second shutout, Erik Karlsson had a goal and two assists, and Ottawa ended Pittsburgh’s seven-game winning streak with a 5-0 victory Monday.

Ottawa led 2-0 in the second period and put the game out of reach with three goals in the third, including Karlsson’s 10th of the season at 1:36.

“It was a nice goal, and it was nice to get it early in the third and kind of kill the game a bit,” Karlsson said. “It’s nice to come out in the third, and we really kept going. We didn’t want to try and give them any reasons to come back in the game and the third goal there was nice to see early.”

Anderson recorded his 24th career shutout, the Senators’ first since he stopped 35 shots in a season-opening 1-0 win against the Buffalo Sabres on Oct. 4.

Pittsburgh went 0-for-7 on the power play, including a 5-on-3 opportunity for 1:12 with 3:31 remaining in the third period. Ottawa went 1-for-3 with the man advantage.

“They got some momentum in the second but our [penalty] killers did a great job,” Anderson said. “When we had the puck on our stick we made sure we got it down 200 feet, and that’s usually when you get punished on the penalty kill. When you get an opportunity to clear and you don’t clear, that’s when teams usually punish you and they make you pay, so we really focused on that, and made sure that when we did have it on our stick we got the puck down the ice.”

Pittsburgh captain and NHL scoring leader Sidney Crosby’s point streak ended at 10 games. Crosby, who has 54 points and was named the League’s Second Star of the Week on Monday, had seven goals and 10 assists during it.

It was the eighth time Crosby has been held without a point in 39 games. The Penguins were shut out for the second time this season; Pittsburgh lost 1-0 to the Colorado Avalanche on Oct. 21.

Marc-Andre Fleury, who played his 499th regular season game, made 24 saves in his 479th start.

“I think we knew we weren’t going to win every game until the end, but every time you lose it’s frustrating, especially when it’s 5-0,” Fleury said.

Pittsburgh, which had won 12 of its previous 13 games despite several injuries, lost forward Pascal Dupuis to a lower-body injury on his second shift of the game. Dupuis collided with Crosby, whose right skate flew perilously close to his linemate’s head after he was upended by an open-ice hip check by Ottawa defenseman Marc Methot.

“He tried going wide on me so I’m going to play him physical,” Methot said. “I respect him. I’ve got a ton of respect for that player, and I think he’s one of the best players in the world, and you’ve got to play him hard, and that was our goal tonight.”

Dupuis favored his right leg as he was helped off the ice by linemate Chris Kunitz and defenseman Matt Niskanen. The Penguins right wing did not return, and Pittsburgh coach Dan Bylsma had no update on his condition after the game.

“I’m pretty sure shaking my head doesn’t do any good,” Bylsma said. “It seems like an awful lot, but right now we’re just hoping that it’s not a severe injury.”

Crosby left the game briefly moments after Dupuis went to the dressing room but he returned within minutes. He was upset about Methot’s hit.

“I haven’t seen the replay,” Crosby said. “I don’t know how low it was. He almost blew my knee out, so it was pretty low. I don’t know if it was right above my knee or above my hip, but it was awfully close.”

Told about Crosby’s comments, Methot defended the check as a clean hit.

“I’ve been throwing hip checks my whole career,” Methot said. “If I’m still on my two feet, and I’m 6-foot-3, I don’t think I can get much lower than his knees.”

Karlsson, who assisted on Ryan’s team-leading 17th goal in the second period, made it 3-0 lead with a highlight-reel goal at 1:36 of the third. The Senators defenseman broke down the right side to take a pass from Clarke MacArthur. He cut inside on Penguins defenseman Olli Maatta as he approached the blue line and snapped a shot from the right faceoff dot over Fleury’s left arm into the top right corner.

Karlsson got his third point with an assist on Turris’ ninth goal, which made it 4-0 at 12:42.

Conacher, who drew into the lineup after forward Mika Zibanejad was a last-minute scratch because of the flu, scored Ottawa’s fifth goal at 14:02.

The Penguins were down to 10 skaters on their bench at one point when Crosby and Niskanen went to the dressing room briefly in the first period after Dupuis left the game. Referee Dean Morton also left the game momentarily after he was hit by the puck squarely on the back on a hard dump-in by Ottawa’s Cody Ceci.

Smith scored for a second straight game to give the Senators a 1-0 lead at 6:54 of the first. After winning a draw against Pittsburgh’s Jussi Jokinen in the right faceoff circle of the Penguins’ zone, Smith drove to the net as the puck went back to Ceci.

Fleury stopped the 20-year-old defenseman’s shot from the right point, but Smith got the rebound and put a backhand shot inside the right post for his seventh goal.

Ryan scored on a power play at 5:46 of the second period to put Ottawa up 2-0. He deflected Chris Phillips‘ slap shot from the left point past Fleury for his team-leading 17th goal.

Anderson stopped James Neal on a breakaway just past the 12-minute mark of the second.