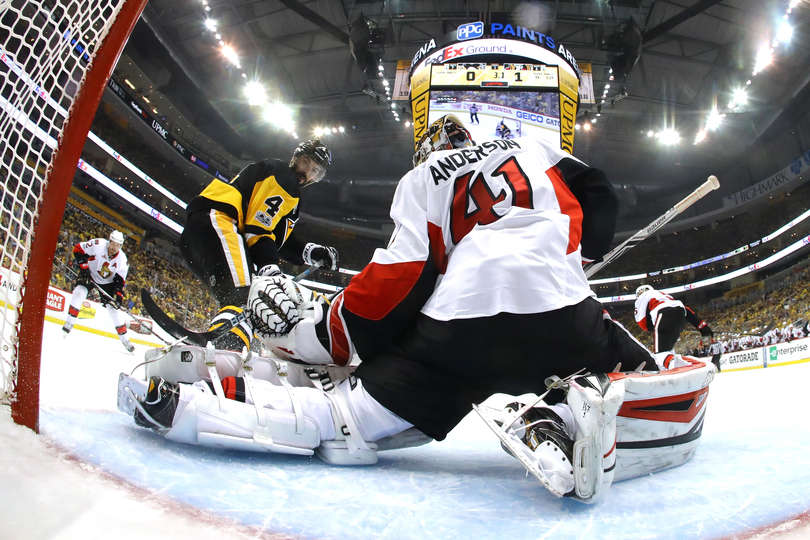 Ryan has impressed during his 10 NHL seasons but has never reached the heights Crosby has.

But Saturday, Ryan scored 4:59 into overtime to give the Senators a 2-1 win against Crosby and the Pittsburgh Penguins in Game 1 of the Eastern Conference Final at PPG Paints Arena.

“It felt great, obviously, to come through in an important and crucial moment,” he said.

Ryan skated in on goalie Marc-Andre Fleury and went forehand to backhand to score.

“[Ryan is] playing unreal,” Senators forward Kyle Turris said. “He’s been consistently one of our best forwards. He’s creating. He’s been real strong on the puck. He’s very competitive, battling hard and playing solid on both ends of the ice.

“He’s definitely stepped it up. I think we need everybody to elevate and chip in and reach another level in the playoffs. He’s a prime example of that.”

The Senators are 6-1 in overtime this postseason. Game 2 of the best-of-7 series is here Monday.

Penguins forward Evgeni Malkin tied it 1-1 with 5:35 remaining in the third period. It was his sixth goal, and he leads the Stanley Cup Playoffs with 19 points.

“In the third period, we played so much better,” Malkin said. “We talked in [the] locker room, we understood how they play and started to play better. Like in overtime, they scored a tough goal.

“We understand. They waited. They need one chance, 2-on-1 or 3-on-2 to score. They have good players. We need to play like [we did Thursday against the Washington Capitals in Game 7 of the Eastern Conference Second Round].”

Fleury made 33 saves for the Penguins; Craig Anderson made 27 for the Senators.

Jean-Gabriel Pageau gave Ottawa a 1-0 lead at 14:32 of the first period. Penguins defenseman Brian Dumoulin turned over the puck behind the net to Ryan, who backhanded a pass that Pageau one-timed over Fleury’s glove for his eighth goal of the playoffs. Pageau had 12 goals in 82 regular-season games.

The Senators thought they took a 2-0 lead after Fredrik Claesson wrapped a shot around the net and Alexandre Burrows backhanded it in with 7:12 left in the second period. The referee ruled he deemed the play dead when Fleury had the puck covered with his glove, which is not subject to review.

Pittsburgh failed to score on four first-period power plays. It had a 5-on-3 for 45 seconds after Ottawa was called for too many men on the ice at 4:58, and the Penguins nearly took the lead when Patric Hornqvist’s shot hit the post 14 seconds later.

Penguins forward Phil Kessel hit the crossbar with 2:57 left in the third period.

“This is playoff hockey,” Crosby said. “… You’re going to play games where you get chances and they don’t go in. But if you play the right way, eventually it’ll end up going in. I think we just need to keep the same mindset and find ways to get better.”

After the puck was tipped away from Penguins defenseman Justin Schultz along the near wall, Ryan charged past defenseman Olli Maatta before scoring on Fleury.

Fleury preserved the 1-1 tie after Turris set up Clarke MacArthur, who one-timed an attempt on goal. Fleury used his pad to make the save with 3:09 remaining in the third period.

Chris Kunitz retrieved the puck below the goal line, carried it up the wall and shot toward the net, where Malkin tipped it through Anderson’s legs

“I think there’s a lot of things to like, but it’s just one game. We won’t get excited too much here. … This is the first one. We’re expecting the next game to be even tougher.” — Senators coach Guy Boucher

“For the most part, we find [overtime] the most fun. Playoffs, it’s so much fun. It’s a blast. The regular season is great, but the playoffs are why you play hockey. I think every kid dreams about playing overtime in the Stanley Cup Playoffs. It’s the most fun part of the game.” — Senators forward Kyle Turris

“We had a lot of offensive-zone time. I don’t think we got enough pucks to the net. We’re looking for that next play instead of putting that puck at the net.” — Penguins coach Mike Sullivan

Ryan’s goal was his fifth of the playoffs. He went six games without one since scoring four in the first six games. … Ryan was drafted by the Mighty Ducks of Anaheim and was traded to Ottawa after the 2012-13 season. … Malkin has 148 playoff points (54 goals, 94 assists), one more than Jaromir Jagr for third-most in Penguins history behind Mario Lemieux (172) and Crosby (151). … Three teams have more overtime wins in a single postseason than Ottawa’s six: the 1993 Montreal Canadiens (10), 2002 Carolina Hurricanes (seven) and 2003 Mighty Ducks (seven), according to the Elias Sports Bureau. … Ottawa has won Game 1 in each of its three conference finals (2003, 2007). … Senators forward Tommy Wingels replaced Viktor Stalberg, who is day to day with an undisclosed injury. … Penguins forward Carl Hagelin missed a second game with a lower-body injury.