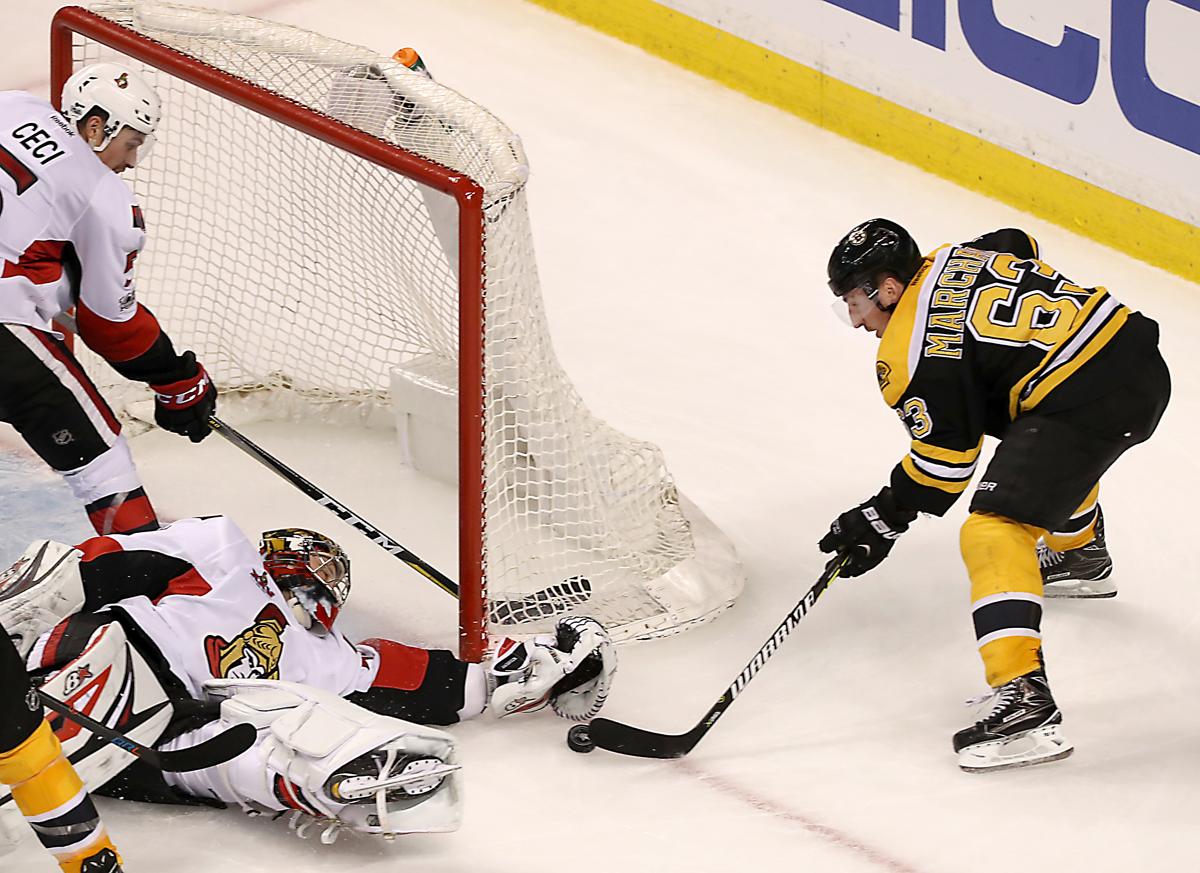 NHL.com recap:
BOSTON — Craig Anderson made 22 saves, and Bobby Ryan scored in the third period to give the Ottawa Senators a 1-0 win against the Boston Bruins in Game 4 of the Eastern Conference First Round at TD Garden on Wednesday.

The Senators lead the best-of-7 series 3-1 with Game 5 at Ottawa on Friday.

Ryan scored his third goal of the series at 5:49 of the third period. He also scored the overtime goal for a 4-3 win in Game 3 on Monday. He had 13 goals in 62 regular-season games.

“When you look at the big picture, this is an opportunity, I’ve said it before, to wash that season,” Ryan said. “I’m trying to focus on contributing now and be in the moment with it. So far, so good. There are a lot of guys in here that are going to contribute in some way down the stretch, and right now the pucks are going in for me, and that could shift. But I’ll take it.”

The Bruins thought they scored when Noel Acciari tipped a shot past Anderson at 10:49 of the second period. But Ottawa coach Guy Boucher challenged and it was ruled Boston was offside.

“Obviously it’s disappointing when those things happen,” Bruins coach Bruce Cassidy said. “We had a tough time scoring, it was a low-scoring game. But the guys on the bench were good. They said, ‘Listen, let’s be resilient here.’ So I don’t think it was a huge factor in the game. It might’ve given them a bit of a life thinking they got a break, but for us, I don’t think it deterred us from what we wanted to do.”

The Senators outshot the Bruins 8-5 in the third period and held Boston without a shot for 12:58.

“The effort was there. We have to find ways to fight a little bit more in front of the net and around the [dirty] areas,” Bruins center Patrice Bergeron said. “Make it a little harder for their goalie but also getting open, and that’s it. Look at the video and work on things and make some adjustments.”

Tuukka Rask made 26 saves for the Bruins, who got defenseman Colin Miller back from injury but played without three regular defensemen. Adam McQuaid (upper body) was injured in Game 2, and Brandon Carlo (upper body) and Torey Krug (lower body) have not played in this series.

Ryan snuck behind Bruins defenseman Charlie McAvoy to score after a slap pass from the blue line by Erik Karlsson. Ryan tucked a backhand past Rask’s stick.

“I saw as soon as [Derick Brassard] got some time there I knew he was going to come to me and I saw that Bobby was over there,” Karlsson said. “I tried not to oversell it and fake like I was going to shoot it, and luckily he made a really good handle on it and stuck with it and pulled it in somehow.”

Brad Marchand had a chance to give the Bruins the lead with 1:47 remaining in the first period when he broke into the Senators zone after a long pass from Bergeron. Anderson sprawled out toward Marchand and blocked a wrist shot with his right hip while on his stomach.

“You know when I was in junior I had Johnny Bower for a day and that was the story,” Anderson said. “He said the first time he ever came out sliding into a guy he was nervous, and I was nervous. You know, I’m just glad it worked out.”

With Rask off for an extra attacker, Boston forward David Krejci’s slap shot from the right point was blocked and went to Marchand near the right post. Anderson dove and twice kept the puck out of the net with his glove and froze the play with 1:03 remaining.

“I didn’t even think about it, but things happen, it was on me, I was offside, so there’s nothing you can do, you just have to continue the game.” — Bruins forward Noel Acciari, whose goal was overturned because he was the player ruled offside after video review

“He’s our best player, and arguably the best player in the world, so you know every night he’s going to break open the game somehow, either shooting or making plays like he did tonight.” — Senators forward Bobby Ryan on defenseman Erik Karlsson

Anderson has four Stanley Cup Playoff shutouts, three with the Senators and one with the Colorado Avalanche (2010). … Karlsson (five assists) and Ryan (three goals, two assists) have at least one point in each game. … Ottawa forward Tom Pyatt sustained an upper-body injury on his first shift and did not return to the game. … Ottawa is 4-0-0 in Boston this season.