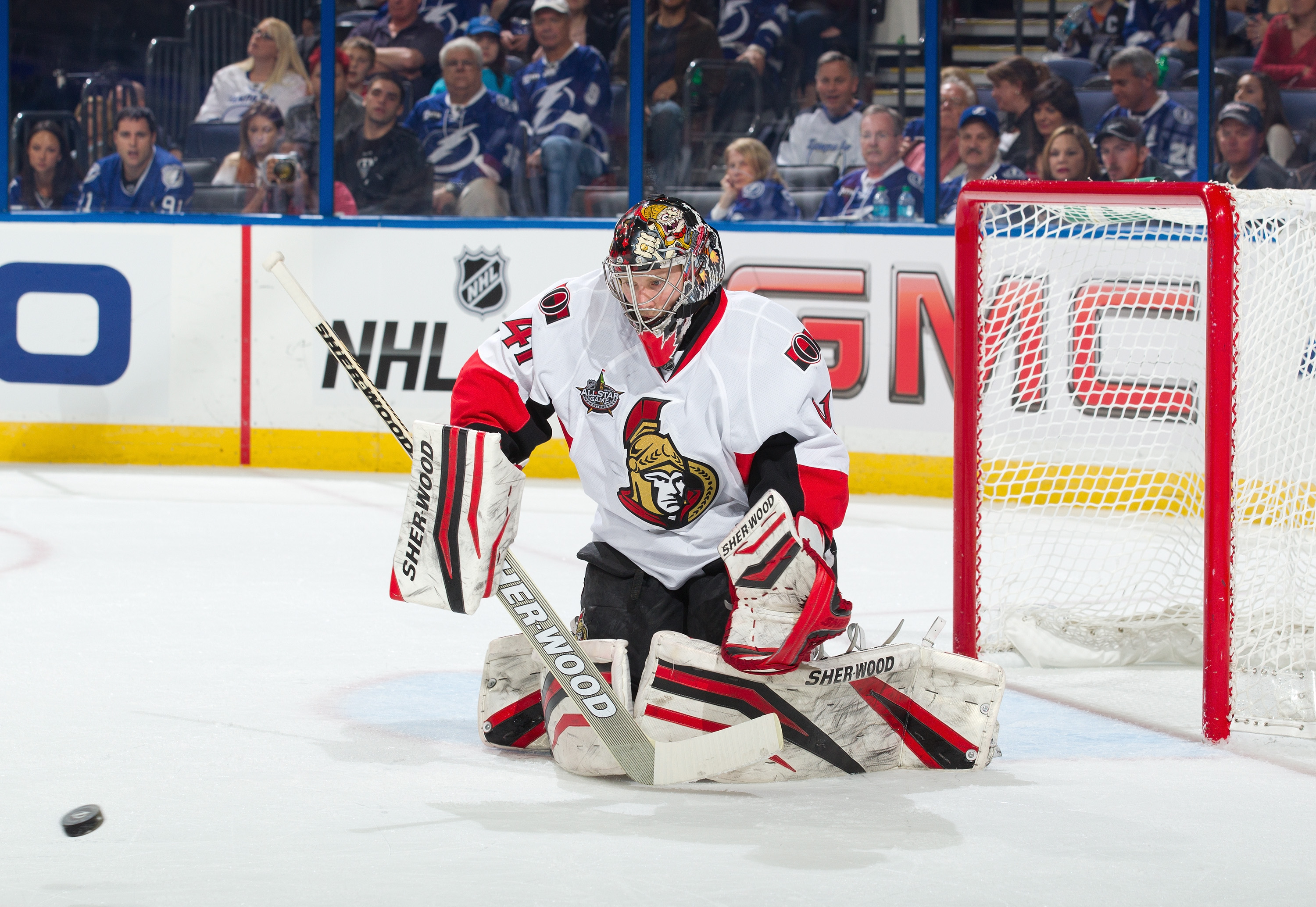 OTTAWA — With nine points in their past 10 games, the Ottawa Senators are making a late run to get back into the Stanley Cup Playoff picture.

The run continued Monday night, when Ales Hemsky scored in the shootout to give Ottawa a 2-1 win against the Carolina Hurricanes at Canadian Tire Centre.

“It feels good to win one that’s just a battle to the end,” Senators center Kyle Turris said. “A full 65 minutes were back and forth. We were working our butts off and we had lots of opportunities. We weren’t able to capitalize, but we stuck to it and were able to pull it out in the end.”

Mika Zibanejad scored in the first for Ottawa, which has points in five straight games (4-0-1) since a 2-8-2 skid nearly dropped it out of the playoff race.

“The goalies keep us in the games now, the last three, four games, and that’s probably the difference,” Hemsky said. “We’re playing better like a team and we move the puck a little bit better from our zone, so it’s much better right now.”

The Senators, who have seven games remaining, are in 12th place in the Eastern Conference with 78 points, four out of a playoff spot.

“The pressure’s not on us right now. The pressure’s on the teams above us and by winning we’re putting more pressure on them,” Zibanejad said.

Jeff Skinner scored his 30th goal for Carolina, which is 13th in the Eastern Conference with 75 points. Ward made 28 saves in his first start in four games.

“It’s tough,” Hurricanes coach Kirk Muller said. “There was a lot of fight in our guys and we’re battling every night, and every point means something.”

There were two minutes of 3-on-3 in overtime after Senators defenseman Eric Gryba and Carolina’s Nathan Gerbe were sent off for roughing at 2:49.

Zibanejad got credit for his 14th goal at 1:41 of the first period. Hemsky created the scoring chance when he dragged the puck through his legs to fly past Hurricanes defenseman Justin Faulk, only to have his shot stopped by Ward.

Hemsky recovered the puck in the left corner and passed back to the point to defenseman Patrick Wiercioch, whose shot went in off Zibanejad’s skate. A video review upheld the goal.

Ward stopped Clarke MacArthur moments later when he was sent in on a breakaway by Turris, who was named the NHL’s First Star of the Week on Monday.

Skinner drew Carolina even at 1-1 at 4:03. Skinner extended his goals streak to four games and his point streak to five when his passout front from behind the net went in off Senators defenseman Erik Karlsson.

The Hurricanes came close to taking the lead a few minutes later when Alexander Semin drove a slap shot off the post from the right side.

“They were pretty tenacious on the forecheck, creating turnovers and such, especially coming out of our own end,” Carolina center Jordan Staal said. “We had a tough time moving it out of our own end, but once we got our legs going we started creating plays and it started becoming a back-and-forth hockey game.”

Senators captain Jason Spezza and defenseman Jared Cowen missed the game after both sustained lower-body injuries Sunday during a 6-3 win against the Calgary Flames.

Zibanejad took Spezza’s place at center between Hemsky and left wing Milan Michalek. Center Jean-Gabriel Pageau dressed for the Senators, who recalled him from Binghamton of the American Hockey League on an emergency basis Monday.

Hurricanes forward Jiri Tlusty left the game late in the second after he was checked into the end boards by Gryba, who was penalized for boarding at 18:10. Tlusty did not return for the third period.

Carolina was two men down for most of the third when center Andrei Loktionov went to the dressing room after he was tripped up in the right corner by Zack Smith at the end of a long shift. Loktionov, who did not return, was checked by Senators right wing Chris Neil earlier in the shift.

Ottawa left wing Colin Greening missed his second game in a row because of a lower-body injury.