OTTAWA – It is often said of young teams competing in the Stanley Cup Playoffs that they need to lose so they can learn to win.

If ever that adage were to be applied to a player, it would fit Ottawa Senators goaltender Craig Anderson, whose personal losses in his career have led to the even-keeled persona he lives by today.It’s a personality trait he feels is a big part of his success in leading the Senators to the Eastern Conference Semifinals against the Pittsburgh Penguins, a series they trail 2-1. Game 4 is Wednesday night at Scotiabank Place (7:30 p.m. ET; NBCSN, CBC, RDS).

“Earlier in my career there were times where you feel really good about your game and you’re all excited to be there, then you have a bad day and it’s like someone shot your dog,” Anderson said Monday, one day after his 49-save performance backstopped the Senators to a 2-1 double-overtime win in Game 3. “You can’t play hockey that way; you have to be a professional and come to work every day and stay nice and even. Usually you have better results when you just focus on things you can control.”

Before becoming what his teammates have called the Senators’ postseason MVP this spring and posting Vezina-worthy numbers during the regular season, Anderson went through more than his fair share of rejection.

He was originally drafted by Calgary in 1999 out of the Guelph Storm of the Ontario Hockey League, but when he saw a new general manager use the following year’s first-round pick on another goalie, Anderson decided not to sign with the Flames and re-entered the 2001 NHL Draft.

He was selected by the Chicago Blackhawks in the third round (No 73) – four picks sooner than he was chosen by Calgary two years earlier – but Anderson was never able to establish himself in Chicago. He bounced back and forth between the NHL and the minors for the first five seasons of his career.

A couple of weeks in January 2006 had a profound effect on how Anderson saw his career as a goaltender and his life, a period where he was claimed off waivers by the Boston Bruins, St. Louis Blues, and back again by Chicago in the span of 15 days.

Anderson began the next season in the minors before being traded to the Florida Panthers in June 2007.

“You can’t get any lower than that, having teams tell you they don’t want you and then another team picks you up and they tell you they don’t want you … then you get traded,” Anderson recalled. “It’s a tough road, it’s a bumpy road. It’s not what happens to you, it’s how you react. I was able to mature quite a bit and figure out that I had to change my ways a little bit to get back to the League and find a way to be successful.” 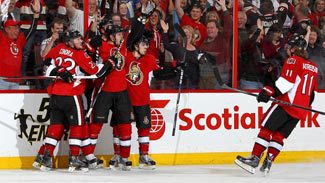 He found that way in limited action over three seasons with the Panthers working with current Montreal Canadiens goaltending coach Pierre Groulx, whose team Anderson played a starring role in knocking out of the playoffs in the first round.Anderson played just 53 games with the Panthers but had a save percentage of .928, making him an attractive free agent option for the Colorado Avalanche in the summer of 2009. But in the final year of his contract he was traded again to the Senators for current Blues goalie Brian Elliott on Feb. 18, 2011.

Upon his arrival in Ottawa, Anderson went 11-5-1 down the stretch with a .939 save percentage and 2.05 goals against average, earning him a four-year contract extension worth $12.75 million.

Anderson’s long and winding road had finally come to an end — and he couldn’t be happier.

“This has been a great spot for me,” Anderson said. “My family and I, we love it here — we love the guys, we love the staff. We’ve been treated unbelievable since day one, so this is home for me. For as long as they want me, I would love to be here.”

“I think what he’s done is matured and he’s figured out where he is and he’s figured himself out,” MacLean said. “All he does is try to be himself and nothing more than that. That’s what all players are searching for, is try to find that level of where they are at and not get over it and not get too far under it. I think he’s done a good job of learning over his career, and that’s what makes him good.”

The travails of moving from team to team and being rejected over and over again have left a mark on Anderson, but the benefit of that is it has taught him to roll with the punches. It’s an ability that comes in handy when you have a less than perfect game like he did in Game 2 against the Penguins — Anderson was pulled for the first time all season after allowing three goals on 21 shots in just over 21 minutes in what became a 4-3 loss.

“For the most part, routines don’t change,” Anderson said when asked to identify the tangible impact of his difficulties early in his career. “I think when things are going well you continue to do what you were doing, when things aren’t going well you continue to do your preparation the same. There’s really no difference between a great game and a poor game other than maybe some puck luck, or your focus or concentration. Your physical abilities don’t change. But if you prepare the same way and keep everything constant there are less things to think about and less things to worry about.”

Anderson’s play in these playoffs has been least of Ottawa’s worries, with his .940 save percentage placing him third in the League and his 2.17 goals against average seventh prior to Monday’s game.

MacLean credits many of the strides his team has made over the past two seasons on having Anderson as a calming influence in goal last season, allowing young players to find their way in the NHL without having each of their mistakes turn into costly, glaring errors because of Anderson’s ability to erase them with a big save.

“He gave us the confidence to start to come together as a team,” MacLean said. “That goaltender you know is going to make a save so it really allows your team to go out and play more relaxed, a bit looser. They’re not afraid that every time the other team shoots a puck at your net it’s going to go in, so it frees them up to play a bit more and they can make some mistakes and it won’t end up in the net.

“I think that’s the type of confidence you want in a number one goaltender and that’s what Craig has given us.”

It’s a just reward for the Senators.

After all, they were the first NHL team to show real confidence in Anderson, and now both team and goaltender are reaping the benefits of it.