OTTAWA — In the midst of rising emotions between the Ottawa Senators and Montreal Canadiens, a goaltending battle continues unabated.

The Senators lead the Canadiens 2-1 in their Eastern Conference Quarterfinals series, with Game 4 set for Tuesday at Scotiabank Place (7 p.m. ET, CNBC, CBC, RDS). While many assumed that the matchup in net would be relatively even, Ottawa’s Craig Anderson has outshone his opponent, Montreal’s Carey Price, through three games. 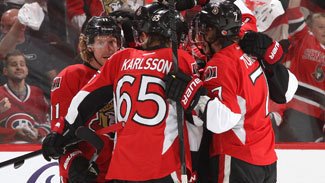 Anderson has a .949 save percentage through three games, placing him third among the 16 active goaltenders playing in the Stanley Cup Playoffs. His goals-against average sits at 2.01, which ranks sixth. Meanwhile, Price finds himself 15th in both categories, with a 3.69 GAA and .879 save percentage.Price’s stats took a hit after the 6-1 loss to the Senators on Sunday — a game in which he stayed in until the finish.

“I think it’s important to hang in there with my teammates and not bail out. I think the best thing to do is fight through it,” Price said.

“I never thought about taking [Price] out,” Therrien said. “The way we played, the loss, it wasn’t his fault. But sometimes you’ve got to feel that pain together, as a team.”

For his part, Price shoulders some of the burden of being down in the series.

“I don’t think we played our hockey [in Game 3], from me out,” Price said. “I think [my play in the series] been fair. There’s obviously room for improvement. If we’re down in the series, I’m not doing enough. I want to play better.”

At the other end of the ice, Anderson continues to look ahead as a way to maintain his calm demeanor through all the drama of the first three games.

“We just need to worry about winning,” he said. “That’s our number-one focus right now. As far as we’re concerned, Games 1, 2 and 3 are all in the past now. It’s time to move forward.”

The verbal and physical battles have taken center stage in this series, but Anderson still refuses to get caught up in the idea of a goaltending matchup whenever it is brought up by the press. He expects Price to rebound from any adversity he may be facing.

“I am [just concentrating on] giving the team a chance to win,” Anderson said. “I don’t worry about the little battles that the media like to bring up about the goalies. At the end of the day I’m not shooting on [Price], he’s not shooting on me. But Price and I are similar: We give our teams the opportunity to win. He’s done that all year for his team, and I expect him to come out [Tuesday] and have a big game. I have to do the same and make sure I make that next save for my team, and he’s going to be doing the same. I have to be better than the Canadiens players shooting on me, and my guys have to go out there and get some goal support.”

Price also sounded ready to put the past behind him.

“It doesn’t really matter to a lot of the guys that we got blown out [in Game 3],” he said. “All that really matters is that we’re down one game in the series. We’re still in it and we have an opportunity to come back and regain home-ice advantage.”